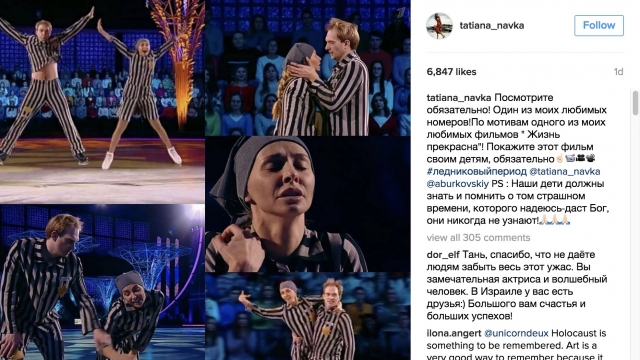 A reality ice skating competition in Russia has sparked controversy for its Holocaust-inspired routine.

Olympic ice dancing champion Tatiana Navka got some backlash on social media after posting pictures of herself and her partner in prisoner costumes — complete with the Star of David.

Critics of the routine said it "celebrated an atrocity," calling it "chilling" and "offensive."

Navka's participation drew extra criticism since her husband is a spokesman for Russian President Vladimir Putin.

SEE MORE: Obama Tells Trump To Follow His Lead On Europe And Russia

Navka said the performance was based on the 1997 film "Life Is Beautiful" and added children need to learn about and remember the Holocaust.

Earlier this year, Russia's version of "Dancing with the Stars" featured a Nazi-themed performance. In that routine, a German officer searched for a young Jewish girl before dancing with her to a Frank Sinatra song.

Navka's ice skating routine was reportedly given a perfect score by judges.