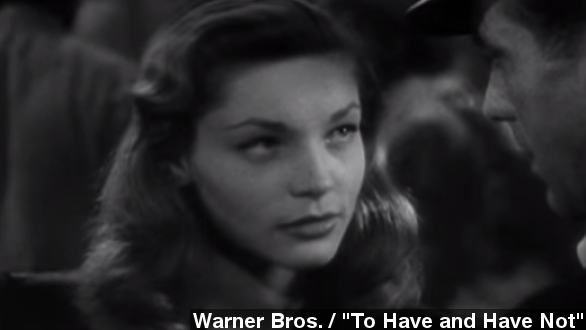 Hollywood icon and American actress Lauren Bacall died Tuesday at the age of 89.

According to TMZ, the iconic actress died from what a family member described as a massive stroke in her home.

The Humphrey Bogart Estate shared the sad news on Twitter, saying: "With deep sorrow, yet with great gratitude for her amazing life, we confirm the passing of Lauren Bacall."

Bacall was married to Humphrey Bogart, who she had shared the silver screen with in movies such as her debut film "To Have and Have Not" and "Key Largo".

Bacall was widely known for what folks called "The Look."

"She didn't have to say anything. She had those eyes that were kinda half shut that hair that kinda fell down a little over her face." (Video via BIO)

She revealed the possible origin to "The Look" in 2011 when she told Vanity Fair that the only way to “hold [her] trembling head still was to keep it down, chin low, almost to the chest, and eyes up at Bogart."

Bacall was Oscar-nominated in 1996 for playing Barbra Streisand's mom in "The Mirror Has Two Faces." She didn't win the Oscar but did nab a Golden Globe for her performance.

She'd worked steadily throughout her life — acting and doing voicework even in the last few years.

​Bacall is survived by two children from Bogart and a son she had with her divorced husband Jason Robards.

This video contains images from Getty Images and Flickr.