Hollywood Can't Decide What The Ideal Bod Looks Like 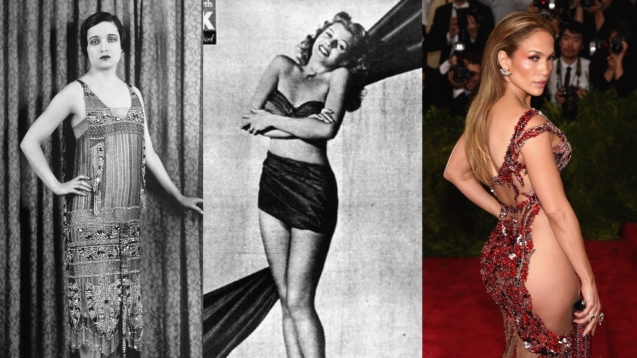 SMS
Hollywood Can't Decide What The Ideal Bod Looks Like
By Katherine Biek
By Katherine Biek
August 20, 2015
What's considered the ideal body image has changed over the decades, but is trying to match Hollywood's version a realistic goal?
SHOW TRANSCRIPT

Tall and skinny. Or curvy with a big butt. If you take a look at celebrities, those seem to be the ideal body types right now.

After all, these are the Hollywood and beauty icons who star in the movies and television shows we watch, sing our favorite songs and grace the covers of magazines.

But these standards of beauty weren't always the norm. In fact, Hollywood's perception of beauty has been in constant flux over the past century.

A "boyish figure" was favored in the 1920s. Women at the time wore undergarments that helped achieve this androgynous look by flattening the butt, chest and hips — think Hollywood "It Girls" at the time, Clara Bow and Louise Brooks.

That enviable boxy look was shunned for a slightly more fitted one and a return to the natural waistline in the 1930s. Standard bra cup sizes were created during this time, allowing stars like Jean Harlow and Ginger Rogers to show off their curvier figures. (Video via Metro-Goldwyn-Mayer / "Wife vs. Secretary" and RKO Radio Pictures / "Top Hat")

Actresses like Lauren Bacall, Rita Hayworth and Katharine Hepburn were idolized for their statuesque, long-legged looks throughout the '40s.

The 1950s were all about that coveted sex-symbol vibe, known mostly for a busty hourglass figure, like those of Marilyn Monroe and Brigitte Bardot. (Video via 20th Century Fox / "Gentlemen Prefer Blondes" and Kingsley-International Pictures / "...And God Created Woman")

Throughout the 1960s and '70s, thin was in. Probably the most recognizable face for this body image ideal was Twiggy, a British supermodel and singer. (Video via BBC / "Top of the Pops")

But trying to emulate these body ideals has become harder and harder. Even as the average woman's body mass index has gotten larger, the "ideal" body has gotten smaller.

During the 1970s, the eating disorder anorexia nervosa began to get widespread attention, especially after singer Karen Carpenter died from it in 1983.

Jane Fonda and her famous aerobics workouts can be partially credited for the more athletic, skinny build that was popular in the '80s. This new look made the quest for the perfect figure even harder.

It was during this decade and into the '90s, the coveted body mass index of celebs really dropped. An article on Rehabs.com, a website about behavioral addictions, says at the time, "Cindy Crawford had a BMI of 19, while Kate Moss' BMI was only 16."

Comparing that to the women of today, the Centers for Disease Control and Prevention says the average adult woman has a BMI of 26.5.

But we're not necessarily seeing this average size reflected in Hollywood or in the media.

Even the size guidelines to be a plus-size model have gotten smaller. If a model wears a size 6, she can now be considered plus-size in the industry.

A change that caused outrage when a so-called plus-size model, who's a size 10, was hired by Calvin Klein for an underwear campaign.

Just taking a look back through history shows that what's popular when it comes to body image is always evolving. And it's only a matter of time before what's enviable now changes.