Hollande Speaks After Standoffs: 'We Have To Use Force' 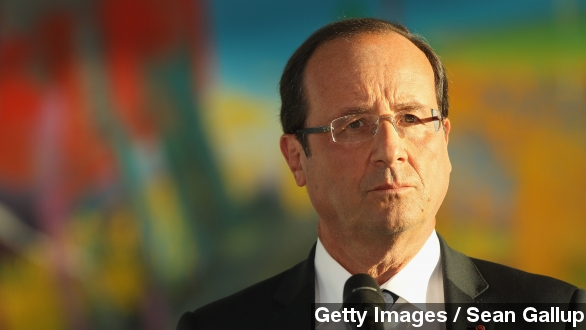 SMS
Hollande Speaks After Standoffs: 'We Have To Use Force'
By Lauren Zima
By Lauren Zima
January 9, 2015
The president of France spoke Friday hours after two standoffs ended with both hostages and terrorists dead.
SHOW TRANSCRIPT

French President Francois Hollande spoke Friday after hostages were killed in two standoffs in his nation.

"We have to be capable to respond to the attacks with force because we have to use force, but also with solidarity. This solidarity is something we have to show with all our capacities — we are a free people, we will not give in to any pressure, to any fears. ... I want to thank the soldiers for undertaking our responsibilities faced with terrorists."

Hollande called for unity in France and said racism and anti-Semitism will not be tolerated.

One of the terrorists had taken people hostage in a kosher supermarket. Early Friday evening, both that standoff and one at a printing plant ended with simultaneous raids by police. Sadly, some hostages were killed. Three hostage-takers were also killed. (Video via CBS, BBC)

Now, a woman wanted in the supermarket standoff is on the run. The two terrorists killed at the printing plant were suspected in Wednesday's Charlie Hebdo killings.