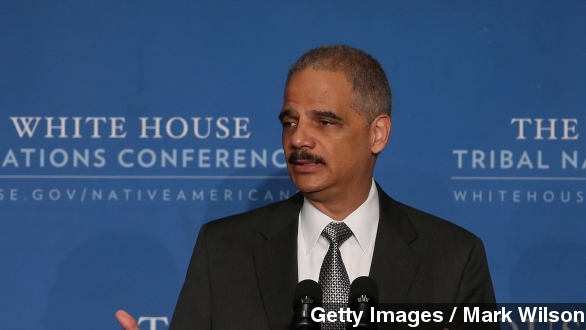 Attorney General Eric Holder made some sweeping changes to a controversial federal program Friday in a move that could curb cops from seizing people's property without good reason.

The new measures prohibit local and state police from using the Department of Justice's Asset Forfeiture Program to confiscate the vehicles, valuables, cash or property of anyone suspected of wrongdoing. Property that poses a public safety hazard, like firearms, ammunition, explosives and child pornography, can still be seized under the law.

Civil forfeiture's become an increasingly controversial issue over the past few years; if you haven't been following this particular debate, here's a brief rundown of what civil forfeiture means and why it's important.

Civil forfeiture as we know it took off during the Reagan administration, when it was seen as a tool to help fight the War on Drugs. The policy gives police federal authority to seize property from anyone suspected of criminal wrongdoing and split the proceeds with the federal government.

Attorney Brian Kabateck told CNN, "The general core of the civil forfeiture law is to capture the cash or ill-gotten gains or contraband that criminals have used to commit a crime."

A recent investigation by The Washington Post found one such forfeiture program has taken $2.5 billion in cash since 2000. $1.7 billion stayed with local authorities, while federal agencies received $800 million from the program.

Proponents of the practice say civil forfeiture represents a kind of poetic justice, using the proceeds of drug cartels to fund the officers who go after them. But civil forfeiture isn't always motivated by the public good.

Las Cruces attorney Pete Connelly told a police convention, "This guy drives up in a 2008 Mercedes. Brand new, just so beautiful. I mean, the cops were undercover, and they were just like 'Ahh!'"

Stories of civil forfeiture abuse, of local police departments seizing the cash, cars and even homes of innocent people, have been piling up over the past few years. And outrage has been growing on both sides of the aisle.

Fox Business's John Stossel said, "If a criminal does bad things and gets due process and gets convicted, I don't care if he loses his property. But with civil forfeiture, innocent people get punished."

The Institute for Justice has vigorously contested the practice. "It's not fair. It's not right. But there's no telling when this nightmare will end."

Lawmakers have petitioned the Department of Justice to end federal forfeiture programs, and Kentucky Sen. Rand Paul introduced a bill last year to place heavy restrictions on how forfeitures would operate.

Holder's new measure only eliminates civil forfeiture on the federal level; most states already have similar measures in place. In many cases, though, local measures require police to hand over proceeds to their respective cities or states.

Since most of the proceeds from federal civil forfeitures went right back to local police departments, opponents of the practice hope getting rid of the federal law will take away an incentive to abuse the policy.