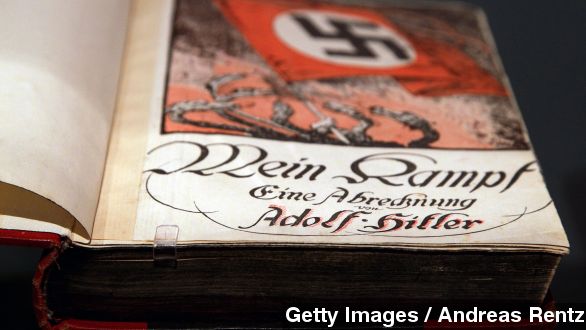 For the first time since World War II, the book that became a kind of Nazi bible will be hitting the shelves in Germany. (Video via U.S. National Archives)

"Mein Kampf" is the hate-filled autobiographical manifesto Adolf Hitler wrote while in prison in the 1920s. Until now, German publishers were banned from reprinting it.

But a copyright held by the German state of Bavaria is set to expire at the end of 2015, paving the way for a new German-language edition to be republished next January.

A taxpayer-funded historical society is producing and publishing the new edition, which will be heavily annotated with commentary from academics.

But critics, including many Jewish groups and Holocaust survivors, charge reprinting the book will only fuel hatred and anti-Semitism. (Video via U.S. National Archives)

The timing is far from ideal. The book's rerelease comes on the heels of anti-Semitic terror attacks in Europe.

Not to mention reports of synagogues getting firebombed and mobs attacking Jewish-owned shops. (Video via YouTube / Gary Davis)

But no matter the timing, coming to terms with Hitler's legacy will always be a challenge for Germany, which must walk the fine line of preserving history without glorifying it.

After the war, the government left some remnants of the Third Reich standing, like these Nazi rally grounds. Others were turned into office buildings and hotels. (Video via YouTube / NSDAP)

The secret bunker where Hitler killed himself was demolished and is now covered up with a parking lot.

This video includes images from Bundesarchiv Bild / CC BY SA 3.0 de and Tonythepixel.