History Is Working Against An Ohio State Championship Repeat 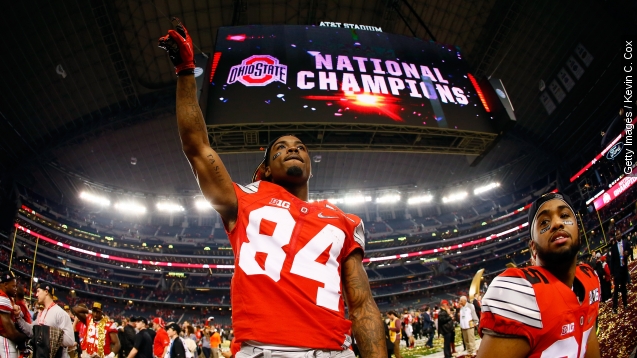 SMS
History Is Working Against An Ohio State Championship Repeat
By Tom Kackley
By Tom Kackley
August 10, 2015
Ohio State is an overwhelming favorite to repeat as national champions in college football this season, but history has something else to say.
SHOW TRANSCRIPT

The defending national champion Ohio State Buckeyes are clear front-runners for next season.

This year’s coaches poll and Vegas odds feature Ohio State as the overwhelming pick to win the Big 10 Conference and repeat as national champions. (Video via PBS, USA Today)

But if history is any indicator, we shouldn't schedule the victory parade just yet.

"This poll is not going to look anything like this at the end of the season," ESPN's Mark Schlabach said.

Just three years ago, USC stood atop the college football world in August then collapsed in historic fashion, finishing 7-6 and unranked by the end of the season.

In fact, only four preseason number one teams have gone on to win the national championship in the last 36 years. The last team to do it was USC in 2004.

Couple that with the fact only ten teams have been back to back national champions since 1940 and it actually looks pretty daunting for Ohio State.