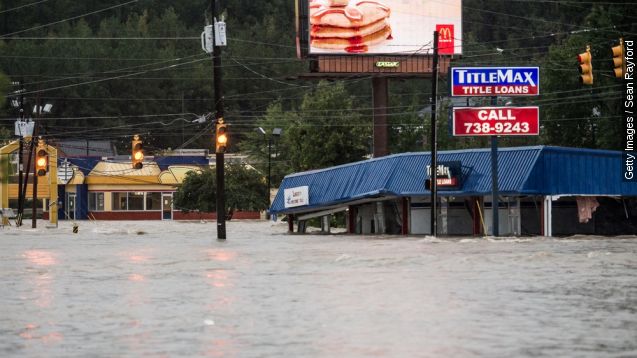 Charleston, South Carolina, continues to battle torrential rain and flooding in what's being called a "once in 1,000-year” event.

Flash flood warnings were issued early Sunday morning, but the situation grew more dangerous throughout the day, as water flooded buildings, stranded cars and washed out bridges. (Video via WLTX)

Tropical moisture from Hurricane Joaquin has heavily contributed to the downpour, though these floods are not a result of the hurricane itself. (Video via WIS-TV)

Charleston's tide level was 8.2 feet Sunday, and residents north of Myrtle Beach reported receiving 16 inches of rain over three days. As a result, President Obama declared a state of emergency in South Carolina. (Video via The Weather Channel, TVNweather)

The Charleston peninsula, where the city's oldest neighborhoods reside, was closed most of Saturday. (Video via Charleston County Gov)

And it doesn't look like the rain will let up anytime soon. AccuWeather reports conditions could continue through Monday.

Six people have died in weather-related traffic incidents since Friday, according to CNN. Officials are using the phrase "Turn Around Don't Drown" to encourage people to stay off the roads. (Video via WMBF)

After all, just 12 inches of water can overpower a standard-sized car.