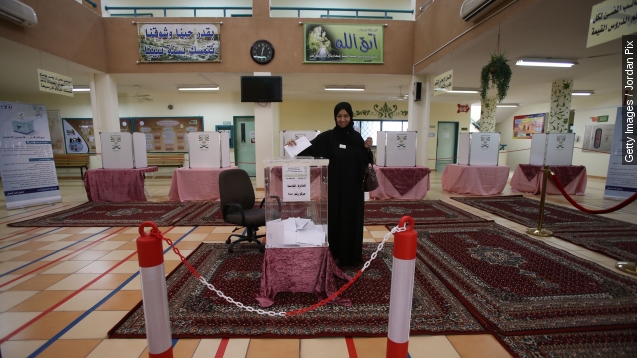 "We have been waiting to be given this opportunity for the past 10 years to be able to participate in the political and social decision-making of the country," said Fawzia al-Harbi, a candidate for municipal council election.

The elections marked the first time Saudi women could vote and run for office. There were 978 women running for municipal seats, compared to 5,938 men.

Female candidates weren't allowed to give public speeches in the same way as their male counterparts. Women were also segregated during voting. Overall turnout was about 25 percent, and 130,000 women were registered to vote.

"There are limitations not being able to meet with the public, so I decided to go to the shopping centers so I can be with the community," another candidate said.

Still, in a country where women's actions are often dictated by men, the decision to allow women to vote has been hailed by many.

"Change is a big word," one voter said, "but the election is the way to make sure we are represented."

King Abdullah proposed reforms to the country’s election process in 2011, and officially added women to a top consultative assembly shortly before he died this year. His legacy is seen as a driving force for elections today.

The new election rules took effect in what is only the country's third election ever, but it was not welcomed by all.

"If we allow her to get out of her house and do such business, who's going to take care of my sons?" one voter asked.