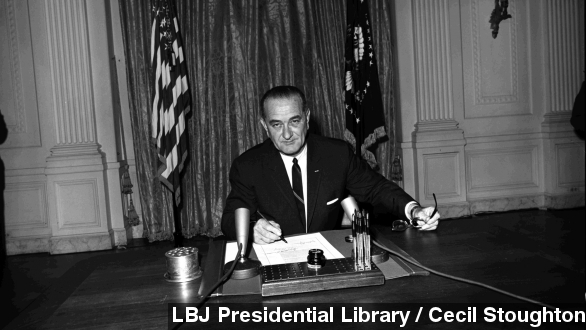 "I am very aware of that, Mr. Hoover. What I do know is that he's nonviolent. What I need to know right now is — what's Martin Luther King about to do next?"

Lyndon B. Johnson plays a prominent role in the film "Selma," but some historians are disputing the portrayal of the 36th president.

That's because in "Selma," LBJ is depicted as reluctant and unwilling to aid MLK in his pursuit of civil rights reform.

Mark K. Updegrove, director of the LBJ Presidential Library and Museum, told Politico earlier in December the film "bastardize[s] one of the most hallowed chapters in the Civil Rights Movement by suggesting the President himself stood in the way of progress."

Four days later, a former top assistant for domestic affairs for LBJ argued a similar point at The Washington Post, pointing to archival records where the president seems to come up with the idea of Selma.

"If you can find the worst condition that you run into in Alabama, Mississippi or Louisiana or South Carolina … and if you just take that one illustration and get it on radio and ... get it every place you can, pretty soon the fellow that didn't do anything but follow — drive a tractor, he'll say: 'Well, that's not right. That's not fair.'"

So, seems like a pretty clear-cut case here. LBJ and MLK were on the same page in 1965, not at odds with each other. Except the movie's director, Ava DuVernay, says not so fast.

On Twitter, DuVernay said the "notion that Selma was LBJ's idea is jaw dropping and offensive" and that "folks should interrogate history" for themselves.

She also points to a 2013 piece from The New Yorker where Johnson is essentially depicted as he is in "Selma" — initially putting the war on poverty first and voting reform second.

And speaking to The New York Times, a professor says the movie accurately depicts how Selma pushed Johnson "to act more quickly than he thought was possible" in initiating voting reform.

There are arguments for both sides. But ultimately voting reform did happen, so the story isn't just about MLK or Johnson. That's probably why another professor told the Times, "In historical truth, the story was really about everybody."

This video includes images from Getty Images and the LBJ Presidential Library.