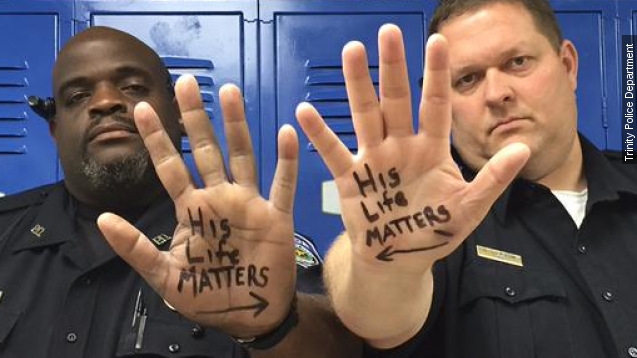 SMS
'His Life Matters' Police Photo Goes Viral
By Newsy Staff
By Newsy Staff
August 13, 2015
After two Texas officers wrote "his life matters" on their hands and posed for a photo, they received national attention and appeared on Fox.
SHOW TRANSCRIPT

Back in May, two officers from the Texas city of Trinity posed for this photo. It got some attention, with about 400 favorites and retweets.

A little over three months later, it was picked up by the American Conservatives of Color Facebook group, which landed it more than 115,000 shares and 25,000 likes.

The photo was a response to the Black Lives Matter movement, which has been critical of law enforcement personnel in the wake of the highly publicized deaths of black Americans, like Micheal Brown, Tamir Rice and Samuel DuBose.

The two men in the photo are Chief Steven Jones, on the right, and Officer Donald Givens, on the left.

After their photo went viral on Facebook, they spoke to Fox about why they took the picture.

"I don't want to put down law enforcement all together, but ... there's so many things that are happening these days that sometimes we can't stand behind officers that do bad things. However, the community and the nation can't condemn every single officer based on the actions of a few," Jones told "Fox and Friends."

The two explained they were aggravated over national protests against police brutality and wanted to send a positive message at the local level. (Video via Trinity Police Department)

This video includes an image from the Trinity Police Department.