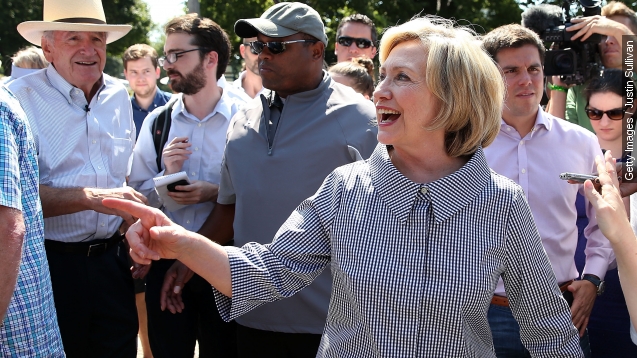 SMS
Hillary Clinton's Snapchat Joke Won't Disappear Right Away
By Samantha Crook
By Samantha Crook
August 15, 2015
Hillary Rodham Clinton used her Snapchat account to make a joke about the email controversy, but not everyone thinks it's funny.
SHOW TRANSCRIPT

Hillary Clinton has a Snapchat account and she used it to try and lighten the mood over her email controversy. (Video via The White House)

"You may have seen that I recently launched a Snapchat account. I love it. I love it. Those messages disappear all by themselves," Clinton said at the democratic Wing Ding Dinner in Iowa.

But Clinton has gotten some less than friendly attention over that joke.

"Do you believe that [the inquiry into your emails] is a laughing matter?" a CNN reporter asked.

"Is that funny?," a Fox reporter asked. "Ya know, I don't even think Hillary Clinton sounded like it was funny. It sounded like she was asking herself what Snapchat was as she was delivering the line," said Erik Erickson of RedState.

Clinton's hardly the first politician to flock to the messaging app, but Snapchat's popularity could prove problematic on the campaign trail, for other politicians too. (Video via Snapchat)

A writer at Fusion pointed out the Federal Election Commission might have a hard time regulating how politicians use the app. Snapchat could potentially let super PACs and campaigns discretely exchange information. (Video via Right to Rise)

For now, presidential hopefuls seem to be pretty transparently using the app to appeal to young voters. (Video via Snapchat, Twitter / Marco Rubio)

This is probably an effective tactic since a ComScore survey found 45 percent of Snapchat users are under the age of 24. (Video via Snapchat)

"We're posting [the New College Compact] on our website, Facebook, Medium, Snapchat, just about everywhere we can think of," Clinton said as she discussed college affordability.