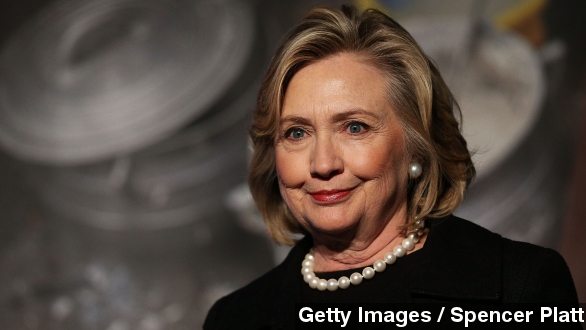 SMS
Hillary Clinton Sidesteps Question On Keystone XL
By Christian Bryant
By Christian Bryant
January 21, 2015
At an event in Canada, Clinton declined to give her opinion on the pipeline but offered alternatives for clean energy and job growth.
SHOW TRANSCRIPT

Former U.S. Secretary of State Hillary Clinton sidestepped a question on the Keystone XL pipeline Wednesday while speaking at an event in Winnipeg, Canada.

"You won't get me to talk about Keystone because I have steadily made clear that I'm not going to express an opinion. It is in our process and that's where it belongs," Clinton said.

That process is a review by the U.S. Department of State and the Environmental Protection Agency. Clinton's remarks come on the heels of President Obama's State of the Union address, in which he only alluded to Keystone XL:

"Let’s set our sights higher than a single oil pipeline. Let’s pass a bipartisan infrastructure plan that could create more than thirty times as many jobs per year, and make this country stronger for decades to come," Obama said.

While Clinton refused to give her opinion on the pipeline, her comments took on a similar tone: "There's a lot we can be doing and exploring to see how we can try to figure out how to power the future, and maybe uniquely, across our borders in ways that not only will be good for the economy and good for our environment, but exportable."

Both President Obama and Clinton seemed to suggest alternatives to the Keystone XL pipeline plan, which has been a political lightning rod. According to one writer for The Atlantic, the similarities in their speeches could be intentional.

David Frum writes the president's Tuesday address was directed at his possible successor, saying Obama is trying "to force Hillary Clinton to campaign and govern on his terms."

This video includes images from Getty Images and shannonpatrick17 / CC BY 2.0.