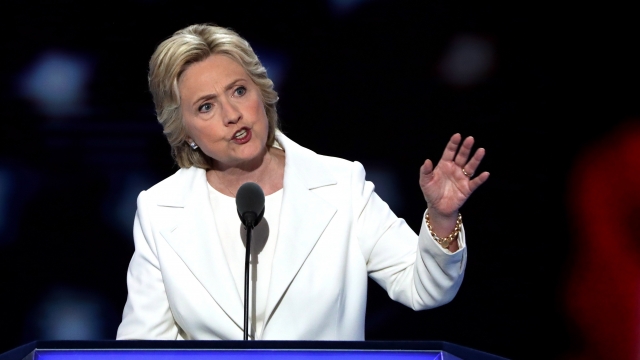 SMS
Hillary Clinton Pits Message Of Unity Against Donald Trump
By Jake Godin
By Jake Godin
July 28, 2016
It was all about the pronouns — "we" vs. "I" — when Clinton rebuked Trump's message Thursday.
SHOW TRANSCRIPT

"Americans don't say, 'I alone can fix it.' We say, 'We'll fix it together,'" Hillary Clinton said at the Democratic National Convention.

That was Clinton's response to Donald Trump's speech at the Republican National Convention.

"Nobody knows the system better than me, which is why I alone can fix it," Trump said at the Republican National Convention.

President Obama had a similar counter to Trump's message when he spoke at the DNC:

"Our power doesn't come from some self-declared savior promising that he alone can restore order as long as we do things his way. We don't look to be ruled," he said.

SEE MORE: Obama Tears Up During A Presidential Farewell At The DNC

Clinton echoed that during her speech, saying, "Remember: Our founders fought a revolution and wrote a Constitution so America would never be a nation where one person had all the power."