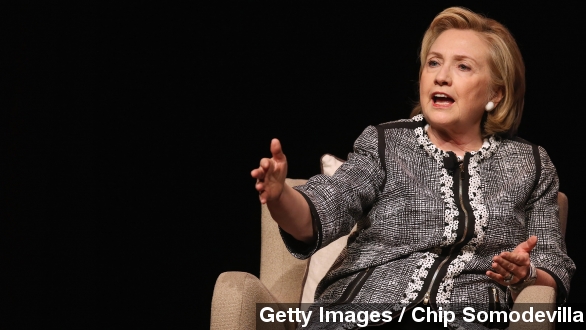 According to a new report from The New York Times, former Secretary of State Hillary Clinton may have violated federal law during her time at the State Department. (Video via U.S. Department of Defense)

The Times says Clinton conducted all of her official business not with a government email address, but with a private one. Aside from potential security concerns, this is a problem because official correspondence is supposed to be preserved for the historical record, per the Federal Records Act. (Video via U.S. Department of Defense)

So just how big a concern is this? One lawyer quoted by The New York Times mentions "nuclear winter," if that's any indication.

"It is very difficult to conceive of a scenario — short of nuclear winter — where an agency would be justified in allowing its cabinet-level head officer to solely use a private email communications channel for the conduct of government business."

And a writer for Gizmodo observed (with a heaping helping of sarcasm), "she only used her personal email address while she was acting as America's highest ranking diplomat, forging peace deals and fighting wars."

Multiple outlets have referenced concerns over secrecy. Because Clinton used a private address, it's not as easy to facilitate the transfer of documents legally belonging to the U.S. government.

While Clinton did hand over 55,000 electronic documents from her personal account, the Times report says her advisers looked through the account and chose which ones to hand over. (Video via U.S. Department of State)

And a Washington Post report suggests Clinton's personal email address may be tied to an account registered as "clintonemail.com."

The company through which the site is registered is called Network Solutions. Regarding security concerns, we reviewed email account offerings from the company. All of them provide some level of encryption technology, but the majority provide it as an optional feature.

No word yet on whether Clinton will face any legal consequences for using her personal email account during her time as Secretary of State. The Times article comes just a day after reports Clinton may enter the presidential race in the next few months.