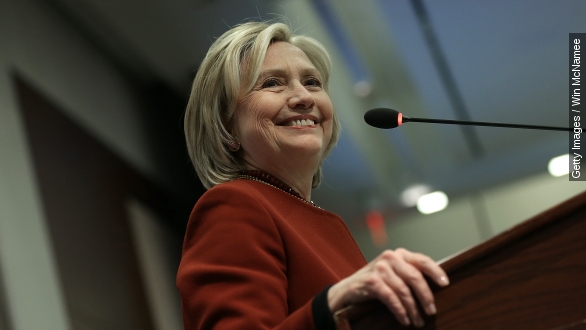 SMS
Hillary Clinton Launches 2016 Run With 2008 In Mind
By Matt Picht
By Matt Picht
April 12, 2015
Clinton's 2016 presidential bid formally began Sunday, and the lessons from her 2008 campaign are front and center.
SHOW TRANSCRIPT

"Let's talk, let's chat, let's start a dialogue about your ideas and mine."

That was Hillary Clinton back in 2007 announcing her ill-fated 2008 campaign for president.

"I'm getting ready to do something, too: I'm running for president."

And that’s Clinton this week as she unveiled her long-expected second bid for the White House.

While Clinton had the advantage of running against a Republican establishment in 2008,​

when she said, "After six years of George Bush, it is time to renew the promise of America."

She now faces the more difficult task of distinguishing her message from eight years of the Obama Administration — without alienating the president's support base.

"I think she would be an excellent president," Obama told the press Saturday.

Clinton's hoping to show how different her 2016 campaign is during her first stop in Iowa this week. (Video via Ready For Hillary)

The large town-hall speeches of Clinton's 2008 Iowa campaigning portrayed her as aloof and out of touch. She went on to lose the state — and later the nomination — to Obama.

This time, Clinton’s campaign is focusing on small, intimate events and grassroots campaigning on the individual level.

And while Clinton seems like a shoo-in for the nomination this time around, her campaign team isn't taking any chances.

An internal memo obtained by Politico reminds Clinton's staffers to "take nothing for granted. ... We always out-compete and fight for every vote we can win."