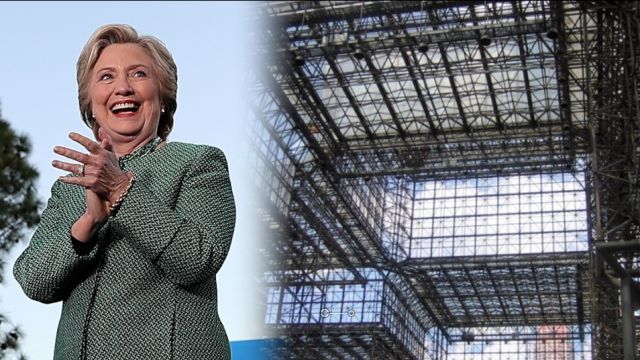 Hillary Clinton will be spending her election night underneath a glass ceiling — possibly for the last time.

"Although we weren't able to shatter that highest, hardest glass ceiling this time, thanks to you, it's got about 18 million cracks in it," Clinton said in June 2008 when endorsing her Democratic opponent Barack Obama.

People on Twitter were quick to point out the symbolism. After all, Clinton has made references to shattering the glass ceiling throughout her campaign.

The location choice also appears to be a not-so-subtle dig at her opponent.

Donald Trump reportedly played a role in the center's development.

As liberal-leaning website Mother Jones reported, Trump was critical of the project in his book "The Art of The Deal" when the city decided to oversee the project itself instead of having Trump develop it. He apparently also wanted the Trump name on the building but was turned down.