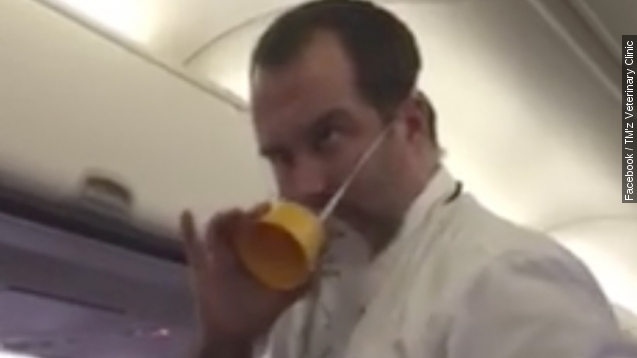 No, this isn't an interpretive dance in the middle of a flight.

This is a typical, run-of-the-mill airline safety demonstration given at the beginning of each flight. Except this one is not so typical. It's hilarious.

A veterinary clinic owner from Canada recorded the impressive demonstration during her recent WestJet flight. And now the clinic owner has others in stitches — the laughing kind — because the video has been viewed more than 7 million times.

And his antics have been filmed before. He's pretty much a WestJet celeb.

The company is known for being funny, too.

One of their ads states, "We will no longer require animals to be kept in the kennel when traveling with us; after all, they're part of the family."

Funny airline. Funny flight attendant. Sounds like a good way to fly. And no, this was not a paid WestJet ad — we promise.

This video includes footage from Facebook / TM'z Veterinary Clinic and music from Kevin MacLeod / CC BY 3.0.