Hike For Your Lives! The Robots Can Navigate Trails Now 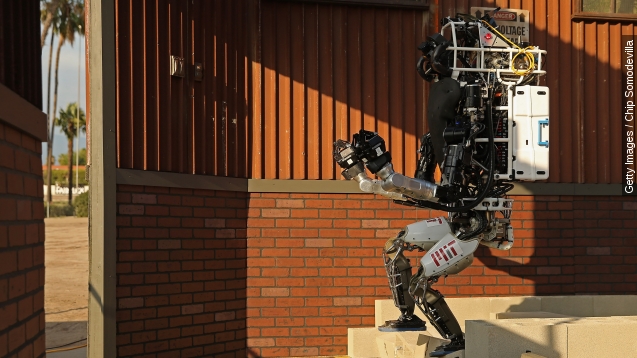 SMS
Hike For Your Lives! The Robots Can Navigate Trails Now
By Evan Thomas
By Evan Thomas
August 19, 2015
Boston Dynamics' Atlas robot, which tests bipedal locomotion and balance, is now walking mostly unassisted on trails outside the lab.
SHOW TRANSCRIPT

The latest advance in humanoid robotics is hiking.

Google's Boston Dynamics showed off video this week of its Atlas robot getting some fresh air, when researchers applied the robot's balance and locomotion to the unpredictable terrain outside the lab. (Video via Boston Dynamics)

Company founder Marc Raibert said, "We’re making pretty good progress on making it so that it has mobility that is sort of within shooting range of yours."

We question the wisdom of creating a robot that can go anywhere it pleases — as do some other writers.

"The machine walks a little like a drunk who's just had double ACL surgery. But it does so insistently. This is one of those beings that doesn't want to be stopped."

Hyperbole aside, there's something to that notion. Stopping — and not stopping — plays a big part in keeping balance. (Video via Boston Dynamics)

“Working a little bit the way people and animals do, where you move quickly in order to keep yourself stabilized,” Raibert said at a recent conference. (Video via Michael Campbell)

The alternative is to go slowly. Whether they’re walking or sorting debris, modern robots still have to think pretty hard about unpredictable scenarios. (Video via DARPA)

Bipedal balance is still almost exclusively a biological thing: so much so, that when robots manage it we give them standing ovations. (Video via DARPA)

The next, um, step, for Atlas is to lose the umbilical cord. It won’t be considered fully independent until it can power itself.

This video includes images from Getty Images and music by Yinyues / CC BY 3.0.