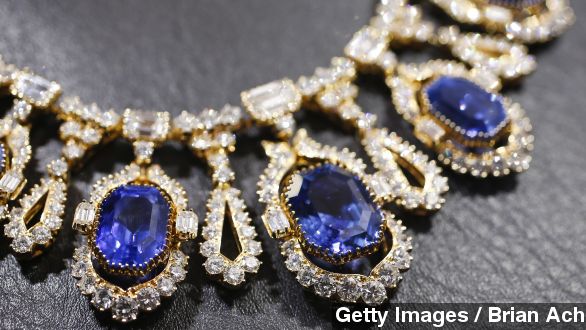 A manhunt is underway in France for a group of about 15 robbers armed with guns and some $9.5 million worth of jewels.

The heist happened Tuesday night on the A6 highway near Avallon. The attackers targeted two high-security vans carrying jewels, then sped off toward Paris.

No one was reportedly hurt in the attack and, according French media, the vans were later found burned in a forest not far from the scene of the attack.

This heist is just the latest in a series of high-profile French jewel thefts.

In 2013, the Cannes film festival was hit by not one, but two daring jewel raids.

The first felt straight out of Alfred Hitchcock's "To Catch A Thief." The same hotel featured in the film was robbed of $136 million in jewels in broad daylight.

Then, that same week, less than half a mile down the street, about 40 watches were stolen from a luxury watch store.

But perhaps the most unusual robbery in France's recent history came in 2008, when cross-dressing gunmen made off with about $92 million worth of watches and jewelry from a Harry Winston boutique in Paris.

In February, eight people were convicted in connection with the robbery.

As for this latest robbery, CNN reports the French police are using aircraft to find the culprits, and forensic investigators are on the scene.

This video includes images from Getty Images, Google and Christophe.Finot / CC BY SA 2.5.