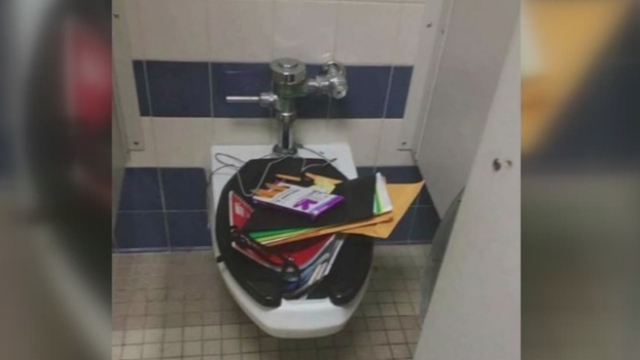 "It's not OK to bully someone who is disabled, deaf or hard of hearing," Hernandez, who's been deaf since he was 1 year old, told Newsy's partners at KMTV.

According to KMTV, Hernandez left his backpack on a chair in the cafeteria at Burke High School while getting some food. And when he returned, the backpack was gone.

Hernandez immediately told school administrators about the missing bag, and they found surveillance footage that showed two male students walking off with it.

The backpack contained some very valuable items, including a battery for his cochlear implant, his debit card, school supplies and his English project.

"I was very upset because I know I work really hard on my project and homework because I just want to make my mom to be happy and know that I did a good job on the homework," Hernandez said.

Other students at the school say they're outraged by the incident.

Some of Hernandez's friends even set up a GoFundMe page to raise money to replace his ruined belongings. They raised more than $800 in just three days.

Hernandez says he wants to talk to the two students responsible and their families about doing the right thing. School officials are reportedly investigating the incident.