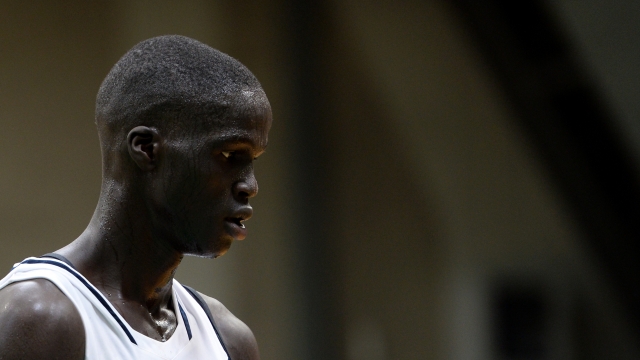 SMS
High School Ball Player Wants To Make First Leap To NBA In 10 Years
By Jamal Andress
By Jamal Andress
April 4, 2016
Thon Maker could make history in the 2016 NBA draft, but this history rests on the NBA finding Maker eligible — and an NBA team picking him up.
SHOW TRANSCRIPT

It's been more than 10 years since a high school basketball player successfully jumped to the NBA.

But five-star high school recruit Thon Maker announced in a Bleacher Report video that he's declaring for the NBA draft — meaning he could set a new precedent for highly recruited high school players.

But all this history rests on the NBA determining that Maker is eligible for the draft and, of course, on an NBA team selecting him, both of which are in question for now.

NBA rules say in order to enter the NBA draft you must be at least 19 years old and one year removed from high school.

Maker is 19, but he's petitioning the NBA to declare him "a year removed from high school." Maker graduated high school in June of 2015 and has been playing ball at a Canadian prep school this past year as a "post-grad player."

Now, plenty of players have bypassed college and still made a leap into the league. Orlando Magic guard Brandon Jennings went to play in Italy for a year before entering the NBA draft.

But Maker is different because he's still playing high school ball as a "post-grad," which is an avenue to the NBA that hasn't really been tested before.

But perhaps what's more pressing than if he's eligible for the draft is if he's ready for the NBA.

Many have said that Maker could use some time in college to develop and that since he burst on the scene his sophomore year, the hype has died down.

But Maker says his draft stock isn't going to deter him, telling Draft Express: "I'm all in. If you're doing something you have to be confident in your choice."

The 2016 NBA draft will be held June 23 at the Barclays Center in Brooklyn.

This video includes clips from Fox Sports and images from Getty Images.