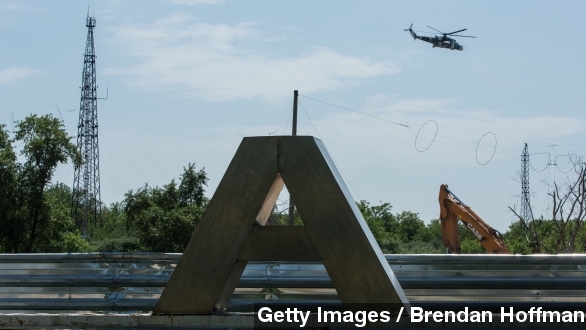 SMS
Here's Why Ukraine's Donetsk Airport Matters
By Kate Grumke
By Kate Grumke
January 23, 2015
The shelled airport lies right between pro-Russian separatists and Ukrainian forces — and control of it would be a huge advantage for either side.
SHOW TRANSCRIPT

In the past eight months, the Donetsk International Airport has gone from looking like this ... to this.

The airport has seen some of the most intense fighting in the conflict between the Ukrainian Army and pro-Russian separatists. [shooting nat pop]

Now, there are reports that Ukrainian troops have finally given up on the Donetsk Airport. Of course, the back and forth is likely to continue. But why has fighting over the travel hub been so intense?

The airport had become a symbol of Ukrainian resistance to pro-Russian separatists. For many, it represented hope for the Ukrainian Army in a region that is increasingly pro-separatists.

Both the airport and the city it served fall entirely on the separatist side of a dividing line that was agreed to by both sides in September.

After capturing some of the last Ukrainian soldiers from the airport, rebels paraded them through the streets of Donetsk, encouraging people to spit on and hit them.

If either side can get the airport back in working condition, it would mean a huge strategic advantage.

And apparently, pro-Russian rebels could have use for an airport.

The Kyiv Post reports separatists in Luhansk told a Russian TV channel they now have an air force.

And that air force could carry out barely disguised defensive attacks in Russian aircrafts.

This video includes images from Getty Images and Goran tek-en / CC BY SA 4.0.