Here's Why The New South Sudan Peace Deal Could Work 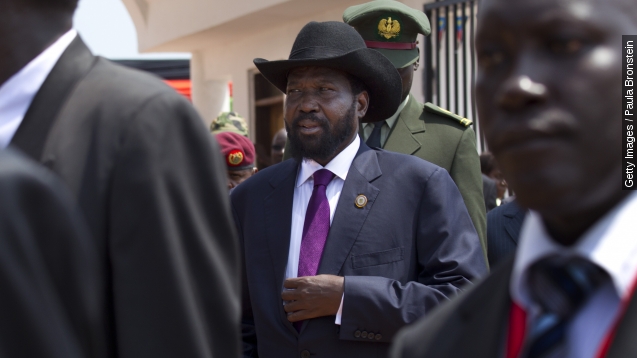 The president of South Sudan and a rebel leader signed a peace treaty Wednesday after a two-year struggle. This is at least the eighth attempt to bring peace to the world's youngest country. So what's different this time?

For one, international pressure. The U.S. and U.N. had threatened sanctions against South Sudan if the two sides failed to sign the agreement. (Video via C-SPAN)

"Those leaders are incapable of creating the peace that is required," President Obama said.

And neighboring countries are also all on board. After president Salva Kiir said he wouldn't sign the deal last week, heads of state from Uganda, Kenya and Ethiopia traveled to South Sudan's capital to ensure he changed his mind. (Video via KTN)

The BBC quotes Kenyan president Uhuru Kenyatta saying there's “no such thing as a perfect agreement” during talks with Kiir.

Some of the terms in the treaty include an immediate ceasefire and the creation of a human rights commission. It also outlines a path to new elections, but until then, Kiir will have to share power with rebel leader Riek Machar, who will become vice president.

It's not clear whether the two sides will be able to put aside ethnic tensions and years of war to actually function together as a new government. (Video via South Sudan TV)

They'll be trying to govern a country with 1.6 million people that have been internally displaced and communities that have been devastated by tens of thousands of deaths in the conflict.

But despite the challenges, officials are calling the treaty the biggest step the young country has taken toward peace. And this time, the U.N. and the neighboring countries will be acting as watchdogs to keep the treaty intact.