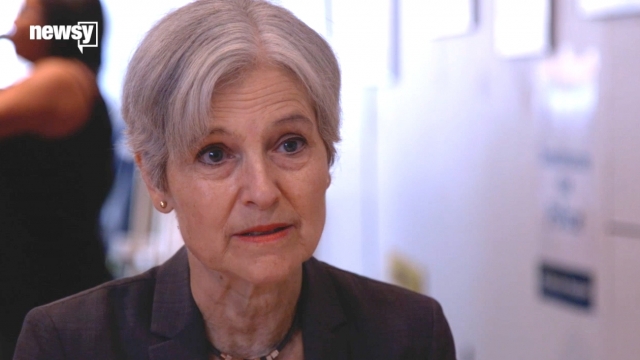 SMS
Here's Why Jill Stein Compares Hillary Clinton To Donald Trump
By Kate Grumke
By Kate Grumke
August 2, 2016
The Green Party candidate for president says Clinton has done the things Trump says he'll do. We asked her what she meant by that.
SHOW TRANSCRIPT

Newsy sat down with Jill Stein, a Green Party candidate for president who's hoping to pull progressive supporters away from Hillary Clinton. One of her most controversial critiques: Clinton's actions are comparable to Donald Trump's rhetoric. We asked her about that idea.

NEWSY'S KATE GRUMKE: "You told NPR a couple of days ago that, 'The scary things, the horrific things that Donald Trump says, Hillary Clinton has already done.' Could we kind of get into specifics on that? What were you talking about?"

STEIN: "So Donald Trump is overtly racist and xenophobic, and it's horrifying to hear. And it's despicable."

STEIN: "She doesn't say that."

GRUMKE: "She couldn't really be compared to those, you know, banning an entire religion — that kind of thing."

STEIN: "In terms of her rhetoric. But she bombs. Over 1 million people have been killed in Iraq, a war that Hillary Clinton plunged headlong into. Hillary Clinton led the charge into Libya. So there are millions of black and brown people and Muslim people who have been devastated by Hillary Clinton's policies."