Here's Why Ben Carson Doesn't Have Any Meat On His Pizza 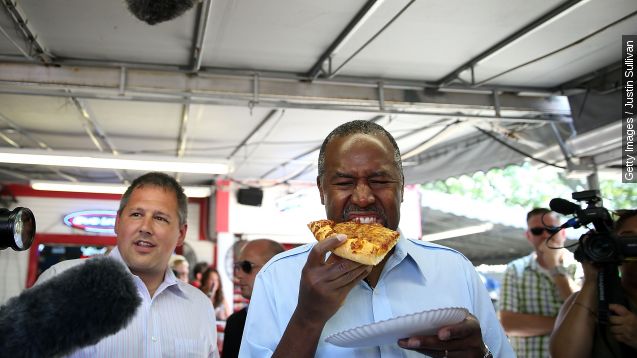 SMS
Here's Why Ben Carson Doesn't Have Any Meat On His Pizza
By Katie Link
By Katie Link
November 2, 2015
Will Republican voters dismiss Ben Carson for his vegetarian habits? A poll suggests it could have an effect on public perception.
SHOW TRANSCRIPT

They say you are what you eat. Well, if that's really the case, some Republicans might have an issue voting for Ben Carson.

Carson is a longtime vegetarian. And according to a 2013 study by Public Policy Polling, some 30 percent of Republicans have a negative view of vegetarians. By contrast, only 16 percent of Democrats hold an unfavorable view of the meat-averse.

Carson is the only vegetarian running for president. In 1990, he told the Vegetarian Times that his faith and health drove him to cut out meat. (Video via Carson America)

So he'll flip a burger, he just won't eat it. Some analysts say that could come back to bite him in states with big meat industries.

So where do the other presidential hopefuls stand on what's at the dinner table?

Former Florida Gov. Jeb Bush is reportedly eating on the other end of the spectrum. He's trying to stick to a Paleo diet on the campaign trail. That means meat, some nuts here and there, and more meat. (Video via Jeb 2016)

Donald Trump reportedly enjoys a steak but has sworn off Oreos.

Hillary Clinton? Well, from her emails, we know she likes hummus ...

Bernie Sanders sat down with some soul food back in September. But we didn't see him touch his plate once during "The Nightly Show" bit, so it's hard to know his eating preferences. (Video via Comedy Central)