Here's How Trump's (Still) Fibbing About His Steaks 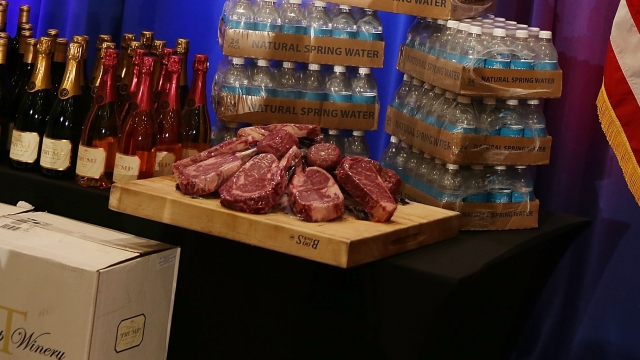 SMS
Here's How Trump's (Still) Fibbing About His Steaks
By Jake Godin
By Jake Godin
March 10, 2016
So where do you buy Trump Steaks? It's not easy.
SHOW TRANSCRIPT

Donald Trump really wants people to think Trump Steaks are still a thing. But ... they aren't.

"I mean, it's a minor ridiculous point, but that fact that he sort of was fibbing about it in a nationally broadcast press conference is kind of surreal," Anderson Cooper said on CNN.

Trump Steaks were sold in partnership with Sharper Image in 2007, but they're no longer available on the site. The trademark was canceled in 2014.

Trump says he still sells the steaks in his buildings — but with a dead trademark, are they really "Trump Steaks"?

Even the steaks at the Trump rally weren't Trump-branded steaks.

A reporter at the rally discovered the steaks were in "Bush Brothers" packaging. So where does one get Trump steaks? Who knows.