How Trap Karaoke Went From A Bar To Barclays Center 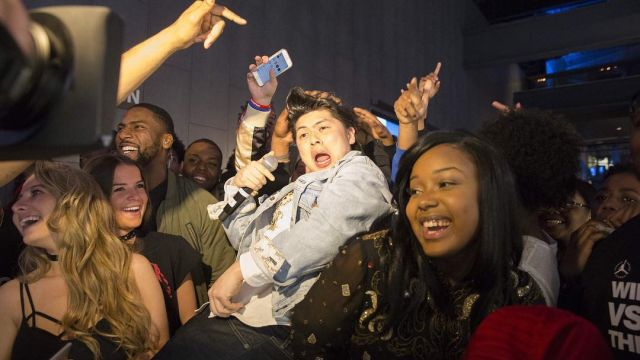 "We started in a little, small hole-in-the-wall joint on East Houston in New York, and now we're in one of the newest, freshest arenas in the country," Trap Karaoke host Lowkey says.

What started as a joke among friends has, um, gotten bigger.

"During the sound check, I was like: 'This could go either way. This could be the wackest thing ever.' But the moment I was like, 'There's definitely something here,' was when this young lady did 'Back to Back.' ... And if you see the original video, it was crazy. People were just so into it. That made me realize there's a potential here; this is more than just karaoke," Mowatt says.

Most karaoke is found in bars, and it's kind of a passive experience. Trap Karaoke is set up like a sold-out show. People line the stage, and that 9-to-5 accountant becomes Jay Z for two minutes.

"The way I described it to Jason when we first thought about the concept was I knew it was going to be therapeutic," Trap Karaoke promoter Jon Wall says. Wall gets credit for the name "Trap Karaoke."

"Where else can you go and belt out your favorite Future song in front of all your friends? It's something empowering about stepping on that stage," he says.

Since starting in New York, Trap Karaoke has been all over: Oakland, Atlanta, Chicago and D.C. — for the second time.

Mowatt says: "We basically brought water to the desert is what someone said to me directly, and I found that story to be true in almost every city that we've gone to. People say the same thing."

It seems major brands around the country have taken notice of this void in entertainment and Trap Karaoke's knack for filling it.

"We did a partnership with Jordan Brand. ... They did a trap karaoke trap-cam at Barclays Center for the Jordan Brand Classic. There were like 15,000 people there. ... It became like this crazy, real party," Mowatt says.

Lowkey adds, "The only time I've been there is to watch something, not to actually do something."

"There's a vision I have in my head [of] where we can take this. The response I've seen has given me a lot of motivation and has really inspired me to make this something bigger than just another turn-up," Mowatt says.