Here's How The Presidential Candidates Responded To Brussels Attacks 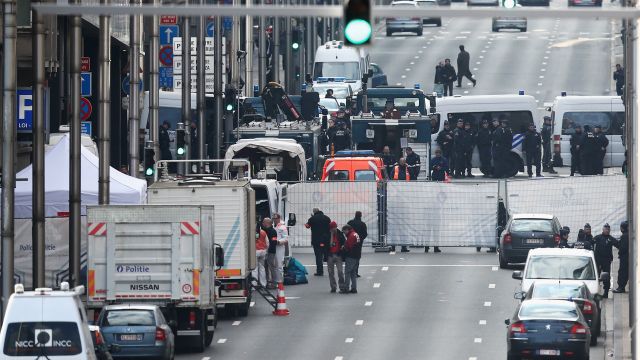 On Monday, terrorists attacked Brussels, killing at least 31 people and injuring hundreds more. So what do our five presidential candidates have to say about keeping America safe?

"I think the way to do that is to deprive them of territory, to stop the flow of foreign fighters, arms, weapons and to take them on on the Internet, which they use in a quite sophisticated way," Hillary Clinton said on MSNBC.

"I would close up our borders to people until we figure out what is going on. We have to be careful in the United States. We have to be very, very vigilant as to who we allow into this country,"  Donald Trump said on Fox News.

The terrorists set off bombs at the international airport and at a subway station, and ISIS claimed responsibility.

"We need to immediately halt the president's ill-advised plan to bring in tens of thousands of Syrian Muslim refugees," Sen. Ted Cruz said during a press conference.

Cruz also wrote on Facebook, "We need to empower law enforcement to patrol and secure Muslim neighborhoods before they become radicalized."

During a police search after the attacks, officials found an unexploded bomb, chemicals and an ISIS flag.

"There needs to be improved intelligence sharing in the United States and our allies all over the world. Effective monitoring of social media to stop the recruiting efforts of young people who are being led into the terrible life of terrorism," Sen. Bernie Sanders said.

"So I see it as a twofold process, to put together the coalition to destroy ISIS and take the comprehensive action. And secondly, to rebuild the intelligence community worldwide," Gov. John Kasich said on Fox News.

Belgian officials released a surveillance photo of three suspects. They believe two died in the attack, and they are searching for the third man.

The video includes clips from MSNBC, Fox News and ABC and images from Getty Images and the Belgian Federal Police.