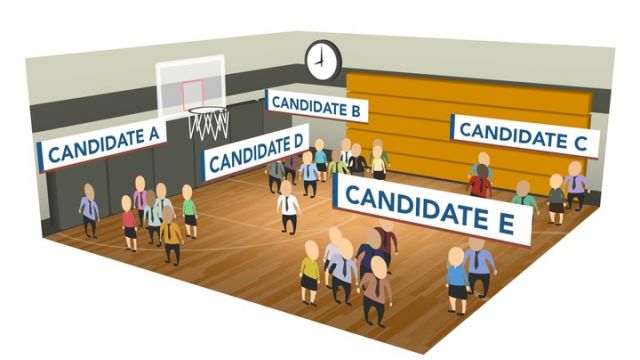 The Iowa caucuses — you don't just show up and vote. Here's how it works.

On Feb. 1, at 7 p.m. local time, Iowans across the state’s 1,681 electoral precincts gather at churches, schools and even private homes to cast their votes.

But the way they do it differs by party.

First, representatives for the campaigns make a brief pitch in a last-ditch attempt to persuade undecided voters.

The caucusgoers then vote by secret ballot, usually on a slip of paper.

The votes are tallied and sent to the state's party headquarters.

The Democrats have a more complicated — and more public — way of doing things.

Caucusgoers declare their choices by physically moving into corners of the room.

These candidate groupings need a certain percentage of the caucusgoers present — usually 15 percent — to be considered "viable."

Candidates who don't make that cutoff are declared "nonviable."

But they have the option of throwing their support behind another candidate during the "realignment period" that comes next.

For 30 minutes, caucusgoers try to persuade people in other groups to join theirs. After all that, a final head count is taken.

But it's not over — for either party.

Because these are caucuses, not elections. Delegates, meant to represent the voters' interests, are selected in a different vote that same night.