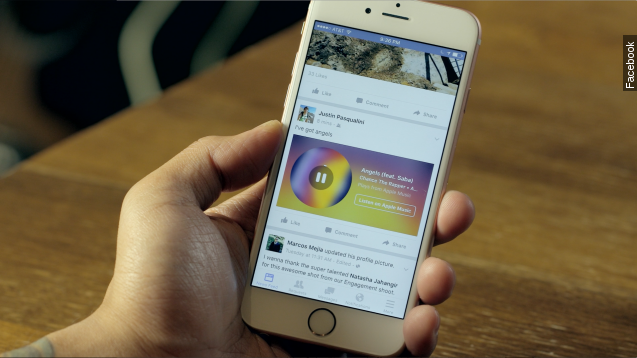 Facebook has announced yet another feature to keep you locked in to its platform.

The social media company announced Music Stories, a new type of Facebook post that lets users share 30-second previews of music — be it a song or an album — and easily access music shared by others.

Music Stories only work for Apple Music, iTunes and Spotify at the moment, but Facebook says more streaming services will be supported in the future. (Video via Apple)

Of note, the 30-second previews are only viewable on Facebook's iPhone app. The company offers no explanation for why that's the case.

As a writer for The Verge points out, this is a much-needed improvement to the share-everything-you-listen-to-on-Spotify approach Facebook has had since 2011. (Video via Spotify)

"Instead of being a dumping ground for everything you listen to on Spotify, Facebook is now only going after the cream of the crop: the music you actively want to share with your friends and family," The Verge's Micah Singleton writes.

And The Next Web suggests the feature will eliminate a lot of needless friction: "I almost always share music via a YouTube clip ... because my friends can simply play the embedded clip instead of opening a separate app."

I'm calling it now: There's about to be a lot of Adele in my Facebook news feed. (Video via XL Recordings Ltd. / Adele)