Here's A Look At Seven Of The Biggest Scandals Of 2015 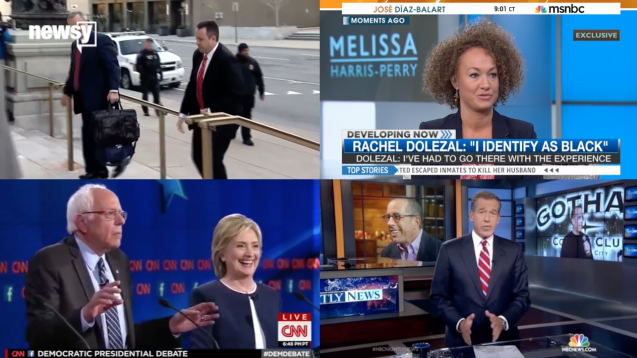 SMS
Here's A Look At Seven Of The Biggest Scandals Of 2015
By Grant Suneson
By Grant Suneson
December 10, 2015
2015 was chock full of big scandals, from political troubles like Hillary Clinton's emails to the NFL's deflategate and the Ashley Madison hack.
SHOW TRANSCRIPT

2015 is winding down, but it was a crazy year for scandals that shocked and captivated the country. Here are seven that dominated the headlines this year.

Former Secretary of State Hillary Clinton spent a good amount of this year defending herself for using private email servers to conduct official State Department business. The news broke in March, so Clinton is probably almost as tired of talking about it as Bernie Sanders.

"The American people are sick and tired of talking about your damn emails!" Sanders said.

The world of sports had its fair share of improprieties as well. The New England Patriots were accused of deflating footballs to make them easier to catch during the AFC Championship game — not that it really mattered. The Pats rolled to a 45-7 win before eventually capturing their fourth Super Bowl title.

But that was nothing compared to the world of international soccer. The U.S. Department of Justice indicted more than two dozen FIFA officials and prompted nine arrests in Switzerland on counts including racketeering and money laundering related to the 2018 and 2022 World Cup bids. (Video via BBC)

Veteran newscaster Brian Williams drew the ire of actual veterans when it came to light that he exaggerated claims about his experiences while covering the Iraq war in 2003. He was suspended for six months and now appears on MSNBC. (Video via NBC)

There are exaggerations, then there are outright lies. Like Rachel Dolezal, who claimed to be black while serving as the president of the Spokane, Washington, NAACP. Except it turned out both of her parents are white. Dolezal said she identifies as black, but she still lost her job as an African studies teacher at a local college. (Video via MSNBC, Warner Bros. Television)

And no list of scandals is complete without the sex scandals. First there was the Ashley Madison hack. The names, credit card information and sexual preferences of millions of subscribers to the cheating website were leaked by hackers in August.

Then there was Jared Fogle. The former Subway spokesman pleaded guilty to having sex with minors and possessing child pornography. He was sentenced to more than 15 years in prison.