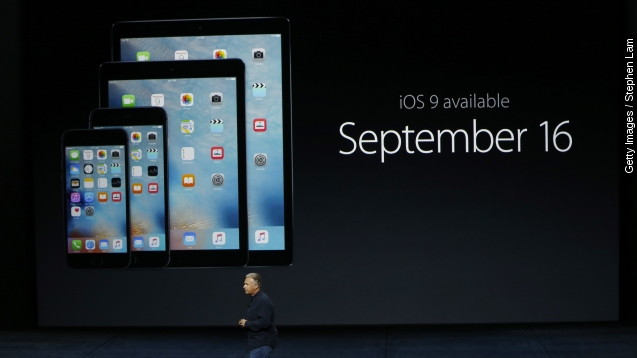 SMS
Here's A Good Reason To Not Wait On That iOS 9 Update
By Leah Becerra
By Leah Becerra
September 16, 2015
iOS 9 is here just in time to fix a security issue on Apple devices with the AirDrop feature.
SHOW TRANSCRIPT

Apple's latest version of iOS launched Wednesday, and along with the benefits we've already heard about, it turns out it also fixes a security flaw.

On top of getting a smarter Siri, better battery life and a universal search, Apple is also using iOS 9 to stop hackers from seizing control of your gadgets. (Video via Apple)

The Australian researcher who discovered the bug told Forbes, "The flaw allowed anyone within range of an AirDrop user to install malware on a target device and tweak iOS settings so the exploit would still work if the victim rejected an incoming AirDrop file."

After a device has been hijacked, a hacker could install malicious programs. If that hacker also got his hands on the infected piece of tech, he even could bypass the lockscreen, opening up new ways the hacker could get at your personal information.

Updating to iOS 9 eliminates the vulnerability, which affects all versions of iOS that support AirDrop, and even Mac OS X versions running Yosemite and newer. Apple has also pushed out an update for OS X.

Moral of the story: Updates are good for your gadgets. So back up your stuff and hit download.