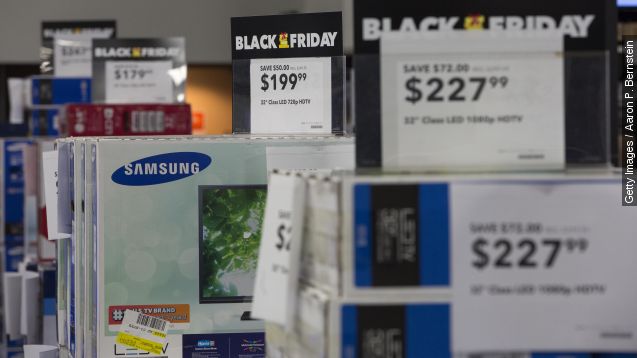 SMS
Here Are Black Friday's Best Electronics Deals
By Matt Moreno
By Matt Moreno
November 25, 2015
From televisions to gaming consoles, there are plenty of deals on Black Friday. These are the best tech discounts.
SHOW TRANSCRIPT

Black Friday isn't just all about elbowing your way to the best deals. You've got to be smart, too.

We've compiled a list of some of Black Friday's best tech deals. (Video via KNXV)

Electronics are always some of the most sought after (and most discounted) products during the shopping frenzy.

This year, Wal-Mart is offering a massive 70-inch Vizio 1080p HDTV for $898. That's a huge discount and a huge TV to carry out of the store.

If shopping online is more your thing, you can get your hands on a Samsung 55-inch SUHD 4K Smart TV for under $1,000 on the Samsung website, Amazon and from other online retailers.

But what good is a massive TV without a gaming system or two to go with it? For $299, customers can pick up the "Uncharted: The Nathan Drake Collection" Playstation 4 bundle at Target, Best Buy, Wal-Mart, Toys R Us and other retailers. (Video via Sony Computer Entertainment America)

Let's not forget about those smaller electronics, though.

Handheld devices like the iPad mini 2 and Kindle e-readers are available for big discounts. Amazon is offering a 6-inch Kindle for just $50, and you can nab an iPad mini 2 from Wal-Mart for about $200.

Last, but certainly not least, are Internet-TV streaming devices. They're growing in popularity, and this year is no different.

Amazon Fire TV Sticks and Roku SE devices will be available for $25. (Video via Roku)

So now when you're positioning yourself at in front of these Black Friday stampedes, you won't have to waste time browsing for the cheapest stuff. Hesitate, and these deals might be gone. (Video via WCPO)