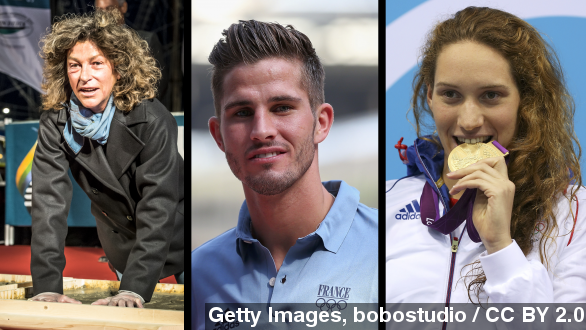 SMS
Helicopter Crash Kills 10, Including 3 French Athletes
By Jake Godin
By Jake Godin
March 10, 2015
A helicopter crash in western Argentina has left 10 people dead including two Olympian medalists and a yachtswoman who sailed across the Atlantic.
SHOW TRANSCRIPT

Three French athletes are among 10 people who were killed in a helicopter crash in Argentina Monday night.

The athletes were part of a reality TV show called “Dropped” where teams of athletes are dropped into the wilderness and have to find their way back to civilization. The helicopters collided while filming a new season taking place in Argentina, Kenya and Nepal.

Five other French nationals and the two Argentinian pilots were also killed in the accident.

Camille Muffat, 25, was a three-time Olympic medalist. She had received  gold, silver and bronze medals in swimming during the 2012 Summer Olympics in London. (Video via Angers Info)

Alexis Vastine, 28, won bronze in Light Welterweight boxing during the 2008 Beijing Olympics and participated in the 2012 Summer Olympics as well. (Video via i>TELE)

Florence Arthaud, 57, was one of France’s most renowned yachtswomen, having won the Route du Rhum in 1990 — a transatlantic yacht race that goes from France to the Caribbean. (Video via Sea Shepherd Conservation Society)

The loss of three elite athletes has hit France hard with government officials and fellow athletes alike expressing their sadness.

French President François Hollande spoke Tuesday on the deaths, saying Arthuad was “an example of freedom and commitment,” Muffat was “a great champion” and that Vastine was a symbol of never giving up.

France's sports minister told RTL Radio “The whole of French sport is in mourning because we have lost three huge champions,” and described Arthaud as the “fiancee of the Atlantic.”

TF1, the channel airing "Dropped," says the reality show will be postponed and the rest of the crew will go home.

This video includes images from Getty Images and bobostudio / CC BY 2.0.