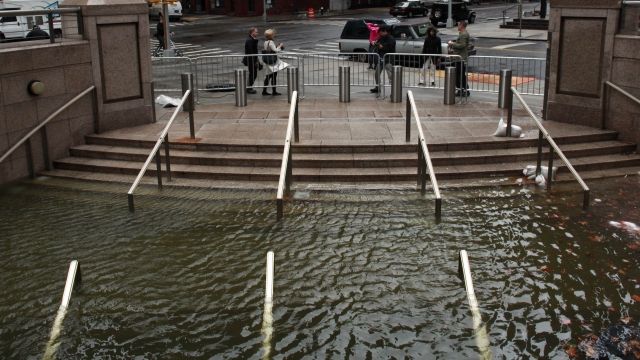 Hurricane Sandy caused record water levels when it came ashore in the northeastern U.S. But researchers working with new climate projections say we might see flooding this bad more often.

Scientists combined historical data and models for future sea levels and storms. Together, the numbers suggest the New York coast could experience Sandy-level flooding as much as 17 times more frequently in the next century.

SEE MORE: A Legend Of A Flood Spurring Chinese Civilization May Be A Little True

The severity of a flood largely depends on two factors: the level of the sea when a storm hits and the storm surge that pushes water up and inland.

NASA measures sea levels based on changes from 1993, when it started keeping track. When Sandy hit New York, sea levels had risen 2.72 inches since then. That trend is expected to continue as more sea ice melts.

Going on this data alone, the new models suggest floods like Sandy's could become more than four times more frequent. By the end of the century, they might occur every 100 years or so instead of two or three times a millenium.

It's harder to be certain of the effects of a storm surge. Wind speeds, the size of the storm and the tides can all change how much water gets pushed around. But factoring in the surge makes things a lot more dire.

The models show in the worst case scenario — where New York is taking direct hits from storms — heavy floods could be as much as 17 times more frequent.

And stronger storms are more likely. While climate change might not cause more frequent storms, climate scientists expect it will make the ones that do happen more severe.