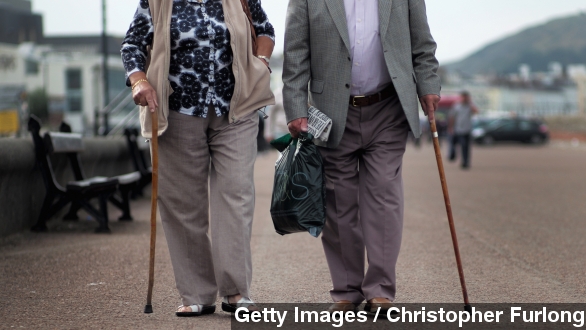 SMS
Healthy Lifestyle Could Reduce Risk Of Dementia
By Katherine Biek
By Katherine Biek
March 12, 2015
People who maintain a healthy lifestyle could see a reduced risk for developing dementia, according to a new study out of Finland.
SHOW TRANSCRIPT

Could something as simple as living a healthy life be a combatant against dementia?

A new study out of Finland is the latest study to suggest that might be the case.

Researchers studied 1,260 people between the ages of 60 and 77 for two years. All were considered to be at risk for dementia and were either placed in a control group, which only received health advice, or placed in what they called an intervention group.

Medscape Medical News reports those in the intervention group all underwent a program focusing on exercising, healthy eating and cognitive training.

At the end of those two years, every participant underwent a mental function test. Compared with the control group, those in the intervention group scored 25 percent higher overall.

Now here's the thing — it's already known that a healthy lifestyle can help prevent various types of dementia.

The Huffington Post reports the lead researcher differentiated this new study by saying, "Our study is the first large randomized controlled trial to show that an intensive programme aimed at addressing these risk factors might be able to prevent cognitive decline in elderly people who are at risk of dementia."

The head of research at Alzheimer's Research UK provided some perspective on the findings.

"The initial results are promising ... but it's unclear which of the interventions carried the greatest benefit," Dr. Simon Ridley said in a press release.

According to HealthDay, the researchers' next step is to continue studying the participants for seven years to see if the discovered reduced risk of dementia with the intervention group continues.