Health Officials Say Ebola Outbreak About To Get Worse 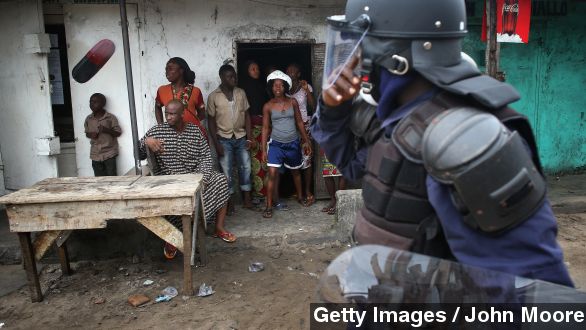 SMS
Health Officials Say Ebola Outbreak About To Get Worse
By Ben Levin
By Ben Levin
September 8, 2014
Health officials say the Ebola outbreak is about to get a lot worse as aid workers and researchers race to combat the disease.
SHOW TRANSCRIPT

The Ebola epidemic that has ravaged western Africa this summer is showing no signs of slowing down — and in fact, researchers say it's about to get a whole lot worse.

"It is the world's first Ebola epidemic and it's spiraling out of control. It's bad now, it's going to get worse in the very near future."

That was Tom Frieden, the director of the Centers for Disease Control. And he's not alone — the World Health Organization last week told officials to "prepare for an 'exponential increase' in Ebola cases in countries currently experiencing intense virus transmission."

The reason? WHO suspects that the normal containment strategies aren't working because Ebola victims and their communities don't trust the medical experts.

A report by the World Health Organization released on Monday says the virus has so far killed 2,105 people — half from Liberia, and the rest mainly from Guinea and Sierra Leone. (Via Google)

So what's WHO's solution? It's simple: Scale up community engagement. But it's also expensive: The organization is asking partners to increase their efforts by three to four-fold.

“The whole world is responsible and accountable to bring the Ebola threat under control. Let’s do it. Action, action, and action."

The United States, at least, seems on board: President Obama on "Meet The Press" this Sunday announced the U.S. military would soon begin deploying its resources and logistical expertise to help aid workers on the ground.

NBC's "Meet The Press": “If we don’t make that effort now, and this spreads … there is the prospect then that the virus mutates ... and then it could be a serious danger to the United States.

Of course, it's a lot easier to contain a disease when there's a cure for it. Currently, 53 percent of people diagnosed with Ebola die of it.

It's a problem that U.S. government scientists have been working on all year, and on Sunday The Guardian reported a potential breakthrough, saying that human trials were underway for a vaccine that worked on monkeys.

But even in a best-case scenario, delivering vaccines to victims will take months — which means, for now, the victims of Ebola and the people trying to help them are on their own.