How Much Do We Need To Know About The Presidential Candidates' Health? 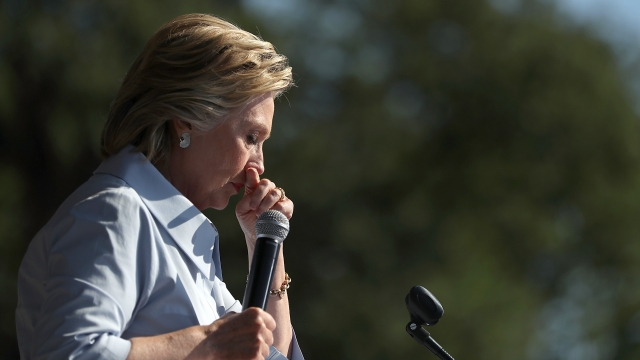 With less than two months to go before the 2016 presidential election, health has become a genuine issue in the race.

Hillary Clinton's campaign announced Sunday night that she is canceling several upcoming events in the wake of her apparent collapse at a 9/11 memorial and her pneumonia diagnosis.

SEE MORE: Here's Everything You Need To Know About Pneumonia

And Monday morning, Donald Trump promised he will release "very, very specific" results of a full medical exam he recently had.

"This last week, I took a physical, and I'll be releasing when the numbers come in," Trump told Fox News.

Trump and his camp say Clinton's diagnosis proves her health is a big issue for the campaign.

After all, he has been calling attention to her recurring cough and physical fitness for weeks now.

But how much does the public really need to know about a presidential candidate's health?

In the past, most candidates have kept their medical history to themselves. Only a few have released detailed medical records, like John McCain did in both 2000 and 2008.

But if a nominee is dealing with a serious illness, many argue that the American people have a right to know about it.

As the author of "When Illness Strikes the Leader" told CNN: "It's a controversial issue because some illness can be blown out of proportion and with modern medicine, a person can do well. But if a person is suffering from early Alzheimer's or another serious disease, it's quite another story."

Still, there have been candidates that managed to keep pretty serious ailments under wraps.

Take Franklin D. Roosevelt, for example. Rumors about his failing health surrounded his final presidential campaign in 1944, but most people didn't know the extent of his ailments until he died the following year.

As for Clinton, she has refused to release any detailed medical records thus far. But many are speculating she'll address the issue soon.