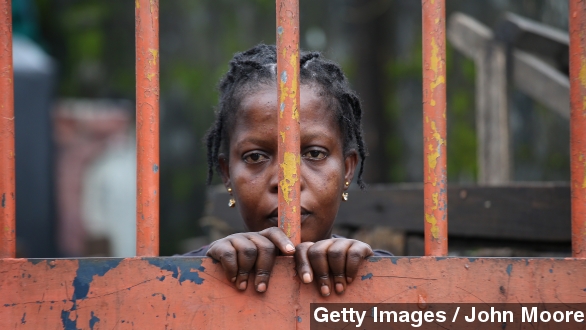 SMS
Health Care Workers 'Chasing' Ebola Outbreak
By Jasmine Bailey
By Jasmine Bailey
September 12, 2014
The worst known Ebola outbreak is proving extremely difficult to contain. Hospitals are full, and victims of the virus are suffering in the streets.
SHOW TRANSCRIPT

As the Ebola epidemic continues to grow across West Africa, the World Health Organization has come forward to admit the virus is out of control and efforts to contain it are failing.

AL JAZEERA: "Here's a graph showing the number of new cases each week since the beginning of the year."

And thousands of new cases are expected to arise by the end of the month.

WHO Director-General Margaret Chan said in a statement Friday: "The number of new cases is moving far faster than the capacity to manage them. ... Today, there is not one single bed available for the treatment of an Ebola patient in the entire country of Liberia."

In fact, the outbreak is so bad in Liberia, The New York Times did a piece called "Dying of Ebola at the Hospital Door." This scene took place outside JFK Hospital — the county's largest hospital.

"It's heartbreaking. There's nothing I can do about it."

"Ten to 15 die each day here, but their beds are quickly filled."

BBC: "You have at least two of the countries affected, Liberia and Sierra Leone, on the verge of collapse. ... The feeling is that we're chasing the disease. We're not on top of it. We're not able to control it."

So what now? Well, WHO says more than anything, it needs people to fight the epidemic. There is a shortage of health care workers in the affected areas.

Upon the call for more aid, Cuba has come forward to offer help. The country has said it will send 165 health care workers — 63 doctors and 102 nurses.

To that news, Chan said: "I am extremely grateful for the generosity of the Cuban government and these health professionals for doing their part to help us contain the worst Ebola outbreak ever known. ... Cuba is world-famous for its ability to train outstanding doctors and nurses and for its generosity in helping fellow countries on the route to progress."

Tuesday the U.S. also promised to send an additional $10 million to help fight the virus. That's on top of the $100 million Washington has already pledged.