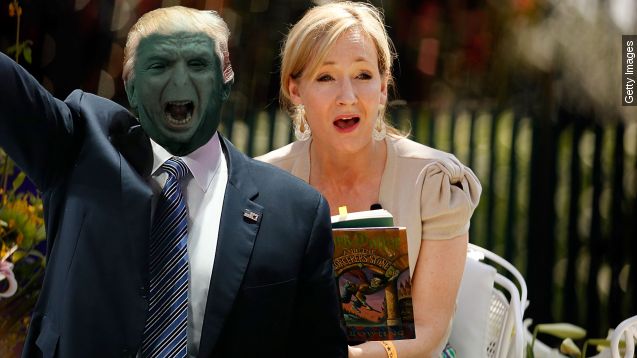 SMS
He-Who-Must-Not-Be-Named Apparently Isn't As Bad As Donald Trump
By Jake Godin
By Jake Godin
December 8, 2015
Trump's recent calls to stop all Muslims from entering the U.S. have prompted JK Rowling and others to compare him to Voldemort.
SHOW TRANSCRIPT

Donald Trump says he wants to ban all Muslims from entering th U.S. (Video via C-SPAN)

For JK Rowling, that made him worse than a certain villain she created: Voldemort. (Video via Warner Bros. / 'Harry Potter and the Goblet of Fire')

The comparison inspired some Muggles to make a few Trump/Voldemort jokes. (Video via Warner Bros. / 'Harry Potter and the Deathly Hallows - Part 2')

Maybe Trump has some horcruxes lying around somewhere?

This video includes music from "darkroasted" by Birocratic / CC BY ND 3.0.