He's Really Back: Ricky Gervais To Host The Golden Globes 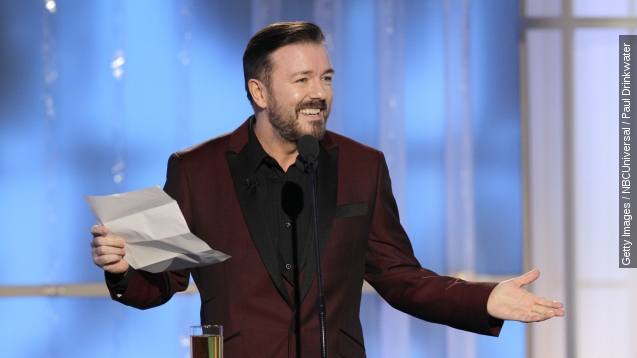 Ricky Gervais is back as host for the 73rd Golden Globes, and it's got many thinking: Perhaps the fourth time will be the charm?

The comedian hosted the awards show for three years starting back in 2010. While he brought in solid ratings, Gervais' sense of humor wasn't exactly popular, especially with some of the nominees.

In fact, The Huffington Post reported back in 2011 that Gervais promised to push the comedic button even further for his third time as host, writing in a blog post, "This year I'm going to make sure [the celebrities'] offense is completely justified."

And boy, did he. After Gervais' last run as host for the 2012 ceremony, the then-president of the Hollywood Foreign Press Association told The Hollywood Reporter, "[Gervais] definitely crossed the line. And some of the things were totally unacceptable. But that's Ricky."

The last three years of the Golden Globes have been hosted by Tina Fey and Amy Poehler.

Despite still poking fun at the celebs in attendance, their humor seemed to be more widely accepted, and in 2014, the duo brought in 20.9 million viewers, which was a 10-year ratings high for the Golden Globes.

But with three straight years of hosting under their belts, it makes sense that the Hollywood Foreign Press Association would want to have another face take over hosting duties this year. It just so happens, it's bringing back a familiar one.

So we'll get on board this Ricky Gervais train for now. After all, the award show seems excited about his triumphant return. And judging by what Gervais posted Monday on Twitter, so is he.