Hayek Says Her Curves Limit Roles, But Does Hollywood Agree? 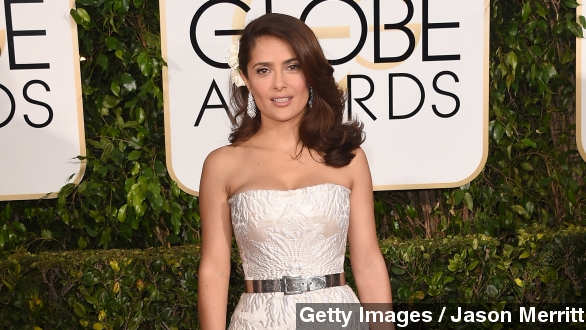 SMS
Hayek Says Her Curves Limit Roles, But Does Hollywood Agree?
By Madison Conklin
By Madison Conklin
February 20, 2015
Salma Hayek might be an award-winning actress, but she says her size, age and accent limit the number of roles she's offered.
SHOW TRANSCRIPT

Salma Hayek claims her curves are the reason Hollywood hasn't had many roles for her lately.

The actress spoke with Net-A-Porter about her curvy body type, saying her age and those curves keep her from getting cast.

Hayek blames missed opportunities on her waistline and accent. She says, "I'm not like the girl next door who is easy to cast."

But curves certainly seem more accepted in Hollywood than they were in, say, the '90s. Scarlett Johansson and Christina Hendricks, to name a few, have found much success in Hollywood.

And one of the most successful women in Hollywood right now is known for exactly what Hayek mentioned: curves and an accent.

"You heard how she said that, right?"

Forty-two-year-old Sofia Vergara has been nominated for multiple Golden Globes and Emmys, and she's the highest-paid actress on TV right now, sitting at a comfortable net worth of $37 million. Plus, she's expanding into movies. (Video via ABC / "Modern Family," Warner Bros. / "Hot Pursuit")

Hayek has kept busy producing and acting. Take a look at her IMDb page — she's got multiple projects in the works. (Video via Warner Bros. / "Grown Ups 2")

But the actress does have a point with some of her comments here — many media and industry members have noted roles for women dry up in Hollywood as they get older.