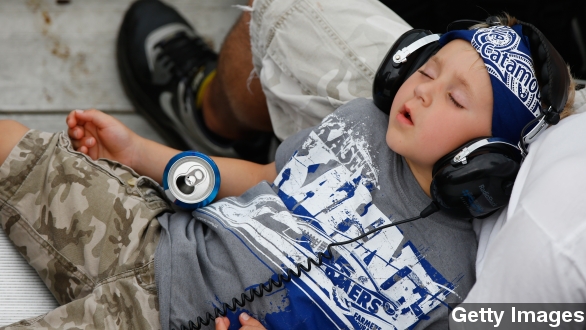 By Christine Slusser
August 26, 2014
A study published in the journal "Neurology" interviewed more than 19,000 people and found 15 percent suffer from being "sleep drunk."
SHOW TRANSCRIPT

Have you ever woken up disoriented, trying to figure out where you are and why you're using your cat as a pillow?

No, we don't mean after a night of tequila shots, just an everyday awakening. Well, you may have been sleep drunk. It's a thing.

Being sleep drunk means you have problems waking up after sleeping, and are often confused. Time called it "a serious and surprisingly common problem."

Serious because researchers say it can result in violent behavior. Researchers interviewed more than 19,000 people 18 and older and found 15 percent had experienced sleep drunkeness within the last year.

The study, published in the journal Neurology sought to find out whether being sleep drunk, or having "confusional arousals," as it's also called, is due to "mental disorders and psychotropic medications."

The study found 84 percent of confusional arousals, or sleep drunk episodes, were associated with either mental disorders or drugs. It also found too much or not enough sleep, bipolar and panic disorders played a role as well.

And while it sounds like a fairly serious condition, New York Magazine noted some of the researchers got some laughs after hearing people's stories from being sleep drunk.

"​One man picked up his alarm clock and mistook it for his phone, holding a two-minute conversation on it."

And since this is a rather quirky story, you better believe outlets picked up on it, too. For real, though, how can you not cover a story on being sleep drunk? Media gold.

WBBM: "When you wake up and feel out of sorts ... you may be sleep drunk."

New York Magazine says people who are used to this sleep drunkeness and have it happen at least once a week, may have a different underlying health issue like an undiagnosed sleeping disorder.