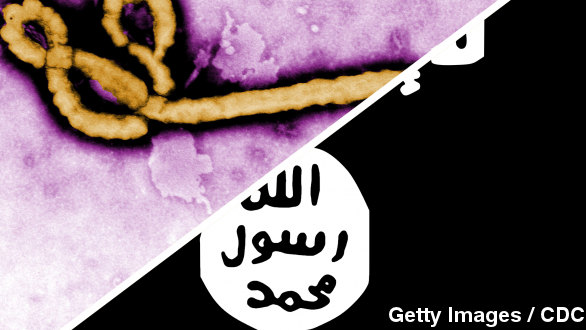 ISIS and Ebola — two of the most talked about issues of 2014 — have apparently converged in Iraq’s city of Mosul. Well, at least that’s what some Iraqi media would lead you to believe.

Other reports claim between two and five fighters were infected with the deadly disease and even that ISIS mandated bodies of those thought to have contracted it be burned after death. (Video via ISIS)

Alright, so we have some Iraqi media outlets saying ISIS is now dealing with Ebola. But how likely is that? Unsurprisingly — not very.

For starters, Iraq’s Ministry of Health denied the claim, pointing out the only facility capable of detecting Ebola within Iraq is in the country’s capital, Baghdad — not Mosul. A World Health Organization official told The Independent the same thing.

The organization’s head of public relations said they were looking into the claim nonetheless.

Then there’s the fact that Ebola’s symptoms aren’t entirely unique. Diarrhea, bleeding, bruising and vomiting are all common symptoms of other illnesses.

A statement by the International Society for Infectious Diseases says it’s more likely these cases in Iraq are malaria relapses. (Video via World Health Organization)

And not to mention, ISIS isn’t even recruiting from West Africa. At least not in large numbers. (Video via ISIS)

According to The Washington Post, most of the group’s African recruits come from North Africa. Specifically, Tunisia. (Video via YouTube / Expoza Travel)

So Iraq probably isn’t dealing with an Ebola outbreak. But with just 8 doctors for every 10,000 people and ISIS reportedly executing more doctors, the country would be ill-equipped to handle an outbreak if there were one.