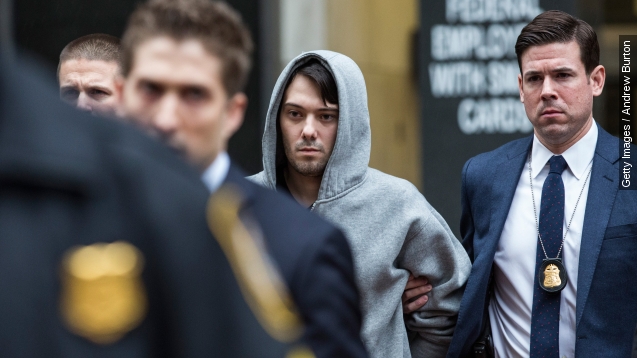 The pharmaceutical CEO who raised the price of a life-saving drug more than 5,000 percent was arrested this morning, according to Bloomberg.

The outlet reports federal prosecutors charged Turing Pharmaceuticals' Martin Shkreli with securities fraud — seemingly unrelated to the price hike. He's currently out on $5 million bond, and his travel is restricted to parts of New York. (Video via Bloomberg)

The company ousted him last year. It also investigated and eventually sued Shkreli for possible corrupt trading practices and alleged fake consulting deals with investors who lost money on Retrophin.

Shkreli's comments on non-pharmaceutical topics have been controversial, too. (Video via CBS)

Just this month, he bought a one-of-a-kind Wu-Tang Clan album for millions of dollars. He told HipHopDX he was going to be conservative about playing it, but said he might play it for Taylor Swift in exchange for sexual favors.