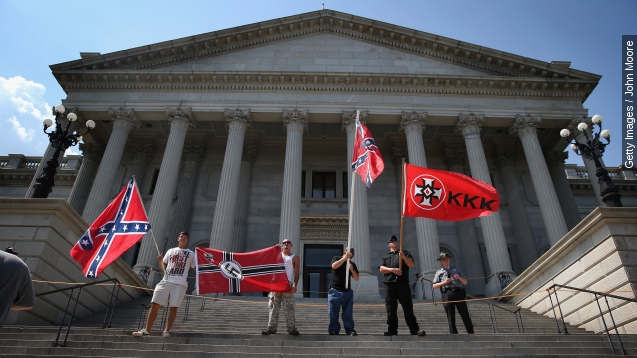 By Sebastian Martinez
August 27, 2015
A number of white supremacist groups have publicly endorsed Donald Trump's run for the presidency, and Trump isn't discouraging them.
SHOW TRANSCRIPT

Reports from the Southern Poverty Law Center and an in-depth feature in The New Yorker have formed a new narrative about Donald Trump: Hate groups love him. (Video via Univision)

So does the narrative hold water? To answer that, let's look at the source.

On Aug. 5, the SPLC, which largely focuses on white supremacy groups, put out this report, citing white supremacists' postings online.

The SPLC points to immigration as a major factor drawing hate groups to Trump. (Video via RT)

Trump's comments, labeling undocumented immigrants rapists and murderers, "are part of a broader anti-immigrant narrative sitting at the core of white nationalism."

And concerns about immigration tie into a broader fear echoed in The New Yorker piece. One white supremacist in the article argued there's "an unconscious vision that white people have—that their grandchildren might be a hated minority in their own country. I think that scares us."

Trump isn't the first candidate supremacists have associated themselves with, of course. Ted Cruz and Rand Paul both returned campaign contributions from Earl Holt III, a man Dylann Roof cited in his manifesto before killing nine people in Charleston, South Carolina. (Video via CBS)

And it should be noted these examples are largely anecdotal. While Trump has gotten by far the most public endorsements from white supremacist websites and figures like David Duke, supremacists likely make up a small portion of his supporters. (Video via KSAZ, Fox News)

That said, he hasn't done much to discourage them, and he didn't seem that surprised by their support.

He doesn't seem worried either.

"Hearing that doesn't make you worry that there's something in your message that's striking a chord with the wrong kind of people?" Bloomberg's John Heilemann asked Trump.