Hasbro's Lifelike Cat Isn't For Kids; It's For Seniors 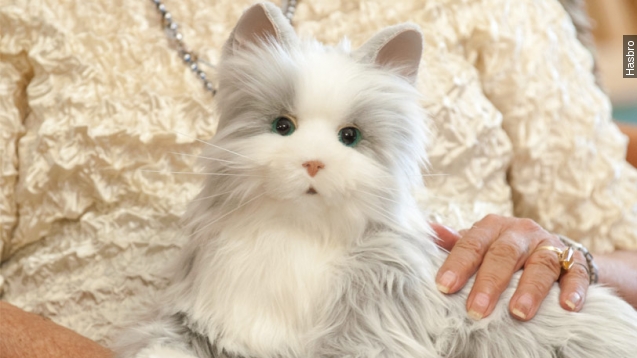 SMS
Hasbro's Lifelike Cat Isn't For Kids; It's For Seniors
By Mikah Sargent
By Mikah Sargent
November 18, 2015
Hasbro launched a line of animatronic cats designed for seniors. The "pets" can respond to touch, movement and sound.
SHOW TRANSCRIPT

Owning a pet can be an enriching experience. Not only because you get to play fetch with Fido or chase-the-string with Mittens, but because pets are good for your health.

According to the Centers for Disease Control and Prevention, pets can decrease your blood pressure and cholesterol levels and encourage you to get more exercise.

Which is why pets are particularly beneficial to the health of older adults. The problem is, many senior citizens are unable to care for a pet. And some — especially the 1.4 million living in nursing homes — may be barred from owning a pet.

Now, Hasbro is tackling this problem paws-first with its Joy for All Companion Pets.

"It's a cat," said one woman in a Hasbro advertisement.

"It's so real. It's really something. It makes you feel happy," another woman replied.

"This is one cat that I'm not allergic to," the first woman said.

Hasbro's Companion Pets are animatronic toys that use built-in sensors to respond to touch, a vibration motor to simulate a cat's purring and soft faux fur for optimal cuddling.

Hasbro said it chose to make the toys after it heard "some of its toys and games are especially appealing to seniors and enhance meaningful interactions with their loved ones."

The company is hardly the first to tackle pet therapy. PARO, a therapy robot developed by Japan's National Institute of Advanced Industrial Science and Technology, has been used in therapy since 2003. It's also far more advanced than Hasbro's Companion Pets. However, the barrier to entry is much higher — PARO costs $6,000 and is a registered medical device. (Video via Ældre Sagen / CC BY 3.0)

Hasbro's Companion Pets aren't registered medical devices, but cost a fraction of the price at $100.

"Oh, I can't believe this. Oh, nice kitty," said one man in a Hasbro advertisement.