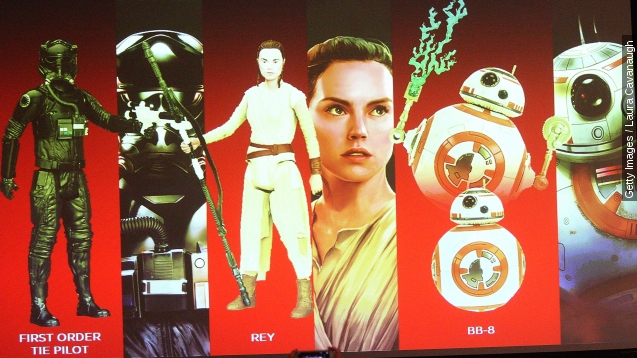 SMS
Hasbro Is Running Out Of 'Star Wars' Toys Well Before The Holidays
By Grant Suneson
By Grant Suneson
November 16, 2015
Hasbro has sold so many toys and action figures for the upcoming "Star Wars" film, it's in danger of running out more than a month before Christmas.
SHOW TRANSCRIPT

We’re just over a month away from the release of "Star Wars: The Force Awakens," but toymaker Hasbro is already struggling to keep up with the demand for the film's merchandise.

Hasbro CEO Brian Goldner told investors, "Inventory has been light in recent weeks and we are working to catch up." This could be due at least in part to the fact that the "Star Wars" prerelease merch campaign will last twice as long as a typical movie.

Disney unveiled many of its tie-ins to the movie on its so-called "Force Friday" all the way back in September, and toys have been flying off the shelves ever since. That's impressive because Hasbro could be missing out on a key demographic.

Hasbro still divides its toys into boys' and girls' sections, with its "Star Wars" merchandise being geared toward boys. That division left some of the series’ female fans feeling left out.

Fans have complained about this pack of six characters sold at Target. It features several male characters, but Rey — one of the film’s main characters — is nowhere to be found. That prompted fans to start the hashtag #wheresrey, asking why the protagonist wouldn't be in the set.

But the complaints have done little to slow down sales. Hasbro's stock has taken off like an X-wing this year, increasing by 59 percent in 2015, according to Fortune. And once the movie finally comes out, that should only continue.

So if you want to get your hands on some cool new "Star Wars" action figures, you might want to do it sooner rather than later. Especially with the holidays rapidly approaching. (Video via 20th Century Fox / "Jingle All The Way")