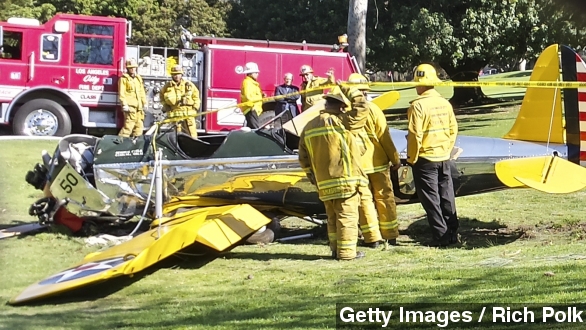 SMS
Harrison Ford Recovering After Plane Crash
By Cliff Judy
By Cliff Judy
March 6, 2015
The iconic actor and avid pilot is "battered, but ok," according to a tweet one of his sons wrote Thursday evening.
SHOW TRANSCRIPT

We can all calm down now. For all intents and purposes, it appears Harrison Ford is going to be fine.

The iconic actor and avid pilot's plane went down Thursday afternoon in Santa Monica just after takeoff. Ford radioed air traffic control his engine failed just before he crashed onto a golf course. (Video via KABC)

While some media outlets reported Ford was in critical condition, his son quickly put that rumor to bed.

Ben Ford tweeted Thursday evening: "At the hospital. Dad is ok. Battered, but ok! He is every bit the man you would think he is. He is an incredibly strong man."

Ford is an aviation enthusiast and has been flying for decades. Witnesses playing at the golf course said it was pretty clear his World War II-era plane wasn't going to make it back to the airport when they heard his engine fail.

"I stabilized his neck, which is a common area of injury. He was obviously moaning and in a lot of pain, and my task, if you will, was to get him out of the airplane in a semi-urgent manner because the fuel was leaking," Dr. Sanjay Khurana said. (Video via ABC)

Of course, you get a star like Ford — who's played a pilot in one of the most popular movies ever — to crash a plane, and Twitter's going to have fun with it. Once Ford was confirmed OK, he got plenty of social media love, including from "Star Wars" co-star Mark Hamill and the Depressed Darth Vader account.

This video includes images from Getty Images and Andrew Siciliano.